Creating radio new scripts is definitely a different process than writing for television or print. In radio, you must be able to catch the listeners’ attention immediately. Depending on the station and the element of the feed, radio news scripts range from 30 to 90 seconds.
As a radio announcer, you will need to be creative and on point to get valuable news information out to your listeners. The choice of words and their delivery are both important aspects of the radio news writing process.
Keep Scripts Short
Short and simple should always be the procedure when creating clear, informative radio news scripts. The news clip should have concise sentences. You will want to be aware of how the words sound as you put the sentences together.
Consider these tips when creating radio news content.
Create short and simple sentences.
Use everyday language. You want your listeners to understand the content. Words containing multiple syllables will make the script more complex. The news broadcaster does not have the time to repeat a sentence to get the point across to the listener. When words are hard to pronounce or too long, the broadcaster will lose the audience’s attention.
Create significant points to deliver the news story across to the audience.
Keep personal opinions out of the segment. You are writing radio news scripts not participating in opinion panels.
Keep your personal emotions out of the written news scripts. The process may be difficult at times. Some news pieces are filled with emotional events. As radio journalists, you must report the news in the most unbiased, thoughtful way possible.
You need to write the script to share the truth about an event. You do not want to provide false or biased information that may lead a listener away from the truth.
Read your content out loud. The process will help you evaluate the written script.
Setting up the News Audio
Radio news scripts will be used as part of the setup process for the news section of a broadcast. Having a summary ready to introduce the upcoming news session will help grab the audience’s attention.
Preparing for the audio is an important factor in creating radio news scripts.
Consider the summary as a tease to the upcoming news segment. You just want to provide the audience with enough information to keep them engaged.
If possible, avoid using the same words in the summary as in the script.
If using music in the background, you will want the volume of the music to be lower than your voice. The audience needs to hear the news without any distractions. The music should not contain lyrics.
Writing radio news scripts can be an exciting and thought-provoking process. The news around the world is always changing at a rapid rate. Providing unbiased radio news scripts will keep you engaged in the writing process. 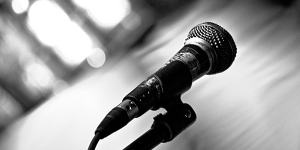 Writing News Radio Scripts
Write in all capitals and double spaced. This is the standard format for broadcast scripts, as it’s the easiest format for the broadcaster to read.

Write for the ear. When writing for news radio, you must write as you speak; this is different from virtually every other writing style. Writing for the ear is much more informal than many writing styles. Write the news radio script in a voice that you might use if you were telling a friend about the news story.

Practice word economy. Don’t use 10 words if you can effectively convey the same message in five words. Short and sweet is key when writing for news radio; listeners have much less patience than readers.

Mention only the vital facts. News radio broadcasting scripts should contain only vital information. In particular, many former print journalists are tempted to include name, age, city of residence and other facts that are typically included in print news stories. Only include this information if it’s vital and significant to the story. A 43-year-old robber’s age is not significant, whereas a 9-year-old robber’s age is significant.

Estimate and use round numbers. Listeners have a difficult time processing “1,893.” It’s much easier to say “nearly 2,000.” Only include specific numbers if it’s absolutely vital to the news story; in most cases, rounding the number is more effective.

Use dashes for cases where each letter of an abbreviation must be pronounced. This means “EPA” would be “E-P-A.” Conversely, “PETA” would remain “PETA” since it’s pronounced as a word; the individual letters are not spoken.

Look for ambiguity. When reading over the script, check for ambiguity and clarity. Avoid potentially ambiguous terms like “he” if more than one person is referenced in the news story. Remember, radio listeners can’t reread a paragraph if they don’t understand. The broadcaster has one shot to get the message across, so the script must be clear and direct.